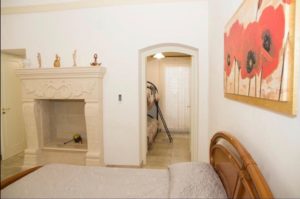 “Le Tenute di Agnese” B&B is an ancient residence of the end of the 19th century. Recently, it has been finely refurbished with high-quality materials. It owes its splendour to the masterful technical supervision of Tonio Venneri Engeneering company in Alliste, and its partners, among which Pierpaolo Nuzzo.

It is located in the main street of Felline, a village of 1500 people in Apulia, Italy. It is 25 km far from Gallipoli and 65 km from Lecce. From its strategic location, you can walk through the village. There are supermarkets and a typical bakery where you can taste traditional products from Salento. The historical centre is characterised by narrow little streets, ancient courtyard houses with Renaissance balconies and windows. In the main square of Felline there is a 12th century baronial castle, the 14th century Church of Saint Leucio Martire, and an old underground olive-mill.

You can reach the Ionian Sea by car in few minutes. You will find a crystal sea and a long beautiful coast with cliffs and golden beaches.
Halfway between Felline and the sea, on a hill, the Santuario della madonna dell’Alto Mare rises up, a shrine built by Basilian monks in the 7th century. From there you can enjoy a breathtaking view over the sea and over the close villages. Felline is near the highway SS 274 which connects Santa Maria di Leuca to Lecce.